All Across The Spectrum excerpt 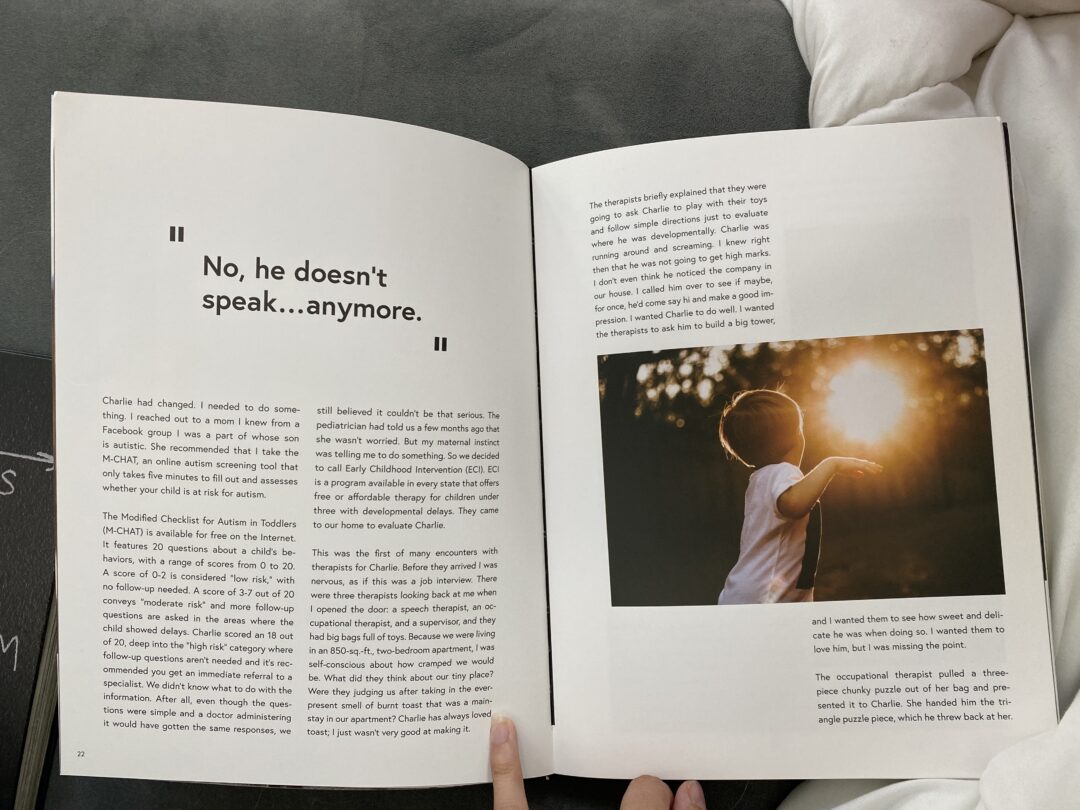 France. 1996. I was six years old, standing still in front of the class, wondering why my classmates were laughing at me. I was humiliated but didn’t quite understand their reaction.

That day, when the teacher asked us to sing our favorite song for the class, I chose a French song from 1935 called “Madame La Marquise,” a song by a popular French singer that depicts the dialogue between a lady and her gentleman, James, who comedically downplays the death of her favorite horse. I found the song hilarious. I sang it using a deep voice to play James and a little squeaky voice for the lady.

As it turned out, I was the only one who found this funny. Kids laughed, but not from joy from a prodigious performance nor because they liked the song. They were making fun of me. Sure, my song choice may have been a bit odd, and the French can be notoriously rigid, but it was the first time I looked around at my peers and thought, “am I different?”

Growing up in France, for as long as I could remember I’d felt different from the other kids. We had different interests and when I spoke, kids often looked confused, as if I were from another planet. My love for classical music and really old songs didn’t help in that regard. I battled through my whole life feeling out of place, just getting by. As an adult, things weren’t coming any easier to me. And then I witnessed my son experiencing the same difficulties. Charlie, it turns out, has severe classic nonverbal autism and a short time after his diagnosis, I finally understood why my experiences felt so near to Charlie’s. I’m autistic too.

While Charlie and I share similar struggles, his are much more severe than mine. Charlie is 6. At an age where his peers are learning to read and write, he still hasn’t learned to talk. As times goes by, the gap between him and the other children grows and grows. As a mom, it breaks my heart to see my little boy struggle so much, struggling to do things that so many take for granted like talking or using the bathroom. Raising a severely autistic child doesn’t come with a manual—it’s a constant learning experience. We go through periods of joy and pride, but there’s also heartbreak and a nagging feeling of powerlessness. There’s no interacting with the little human I created, there’s no running to me when I come home, there’s no hugging him without being pushed away. But there are many piercing screams throughout the day, screams that are constant reminders that I don’t have the ability to make my son feel better. He doesn’t have a way to communicate the cause of his angst. I am powerless over my child’s well-being and that is agonizing.

Being autistic and raising a severely autistic child gives me a unique perspective on the subject of autism. I see both sides of the spectrum every day: I personally live with the struggle of a disability that’s often ignored because it’s not obvious, and I’m fighting each day to take care of my child whose differences are extreme and apparent. Each day brings both the heartbreak of seeing my child not being able to communicate beyond very basic needs and the pure joy of a small gain like him saying “tuh” to request some toast.

I’ve been sharing snippets of our life for a few years now on my blog, The Autism Cafe, and I’ve learned along the way that there are many autistic adults out there who do not share my views on autism. Many believe that only autistic individuals should be able to speak about autism because they are the ones living with it. I’ve also seen them countless times shame parents who express any morsel of negativity about their child’s diagnosis, calling them “martyr parents.” I want parents of autistic children to know that not all autistic adults share these sentiments. I don’t.

I wrote this book with the hope of providing the general public with a tool to better understand the many facets of autism. I want to help parents and loved ones of people affected by autism to not feel so alone in their journey. I want to challenge stereotypes and the incessant policing of how to talk about autism that occurs through social media. Being a parent is hard enough on its own, but raising a severely disabled child comes with its own set of struggles—we do not need the constant judgment from strangers. We are doing the best we can to help our children and deal with our own feelings. And occasionally there are moments when we’re not doing the best we can. And that’s okay. But I promise you, when we fail, we’re the first to be disappointed in ourselves.In this book, I weave through stories about grieving, controversies in the autism world, growing up with an undiagnosed disability, living with an invisible disability and also parenting an autistic child. While many people are quick to critique me for sharing my struggles as the mother of a severely autistic child, I know that there are many more parents who find comfort in my words. This book is for them. For us. I hope you find relief in knowing that there are a lot of us out there, on this lonely journey. We are not alone. You are not alone.

“Charlie? Charlie! CHARLIE!”. Charlie is 16 months old. Getting him to look at us when we are calling his name is, well, it’s difficult. We’re thinking that there’s just so much to explore when you’re a baby, why would he bother answering to his name when he’s perfectly happy spinning a single wheel on his toy car? Now he’s placing the cars in a row. Green car, red car, blue car. Charlie is such a beautiful child. He has a head as round as a pumpkin, plump rosy cheeks, and long curly blond hair that comes down well past his ears.

When Charlie’s focused on a toy, he sticks his tongue out to show his extreme concentration. We don’t see his big blue eyes very often, though. I used to think about how impressive it was to see him occupy himself for hours with the same toy. What a fine attention span! I appreciated his ability to block people out, appearing peaceful, like a protective bubble was insulating him from the big, new, scary world around him. Here he is, sitting on the floor with his little cars, lifting them one by one, looking at their wheels and replacing them in a perfect line. He is content.
Charlie is my first-born, the boy I’d dreamt of having. On the day we went in for my gender-reveal ultrasound, I’d secretly kept repeating to myself, “please be a boy, please be a boy.” As a child, I’d had such trouble staying friends with girls, that it was clear to me that I didn’t understand them. They scared me. Boys, I understood better. When the ultrasound tech finally revealed that Charlie was a boy, I relaxed with the most enormous sigh of relief. A surge of happiness spread over my entire body. I would not only be his mother, he and I were going to be best friends.

Charlie was born full-term. He was the most gorgeous newborn baby I’d ever seen. I remember wondering if all parents think their baby is the most beautiful one of all, but it didn’t really matter to me. He was just perfect. Although, not entirely. After just a few minutes of having Charlie on my chest, something caught my eye. He had two thumbs on his right hand. There was a little extra thumb branching off of his baby thumb and the two thumbs together formed the shape of a “Y.” I called Willy over and showed him, and he went to find the doctor. The doctor apologized for missing the eleventh finger in his post-birth exam and assured our worried minds that things like that are not a sign of anything more serious, that the thumb could be removed surgically sometime in the future.  The months went by and Charlie was a happy baby. He was very independent, and he smiled and laughed. He especially thought it hilarious when I spoke to him in French. These little moments were like little nuggets of gold.

When Charlie was 15 months, we had to fill out a routine questionnaire at the pediatrician’s office. The questions asked whether Charlie talked, pointed with one finger, looked in our direction when we called his name, played with us, made eye contact, was interested in other babies and so on. Charlie wasn’t pointing. He didn’t understand little directions I offered. He didn’t say “mama” or “dada.” He’d start crying uncontrollably at the sight of another baby or toddler.  Looking down at my responses, I started wondering if perhaps something was wrong. But the doctor didn’t seem worried, and just had us keep an eye on his development. While the idea of it being something more serious briefly crossed my mind, I didn’t worry too much about it.  After all, I understood a lot of Charlie’s behaviors, I too liked to be alone, and found eye contact uncomfortable. I figured these behaviors were just part of his personality. Later I learned how important these basic skills are in children’s development. I learned that Charlie’s behaviors were all early signs of autism.

Get your copy of All Across The Spectrum here.